This year Fawn and I went to Gettysburg for Father’s Day.  We had family in both armies,  which was a legacy of Irish Presbyterian families from Ulster settling in Lancaster County, Pennsylvania, then in the next generation having most of the family migrate down the Great Wagon Road through Virginia and into North Carolina.  Some stayed in Pennsylvania, while the bulk of the family moved south.  We spent the day locating where their regiments fought.

We saw a marker at the site of Pickett’s Charge that told the story of a Southern officer who was wounded that day.  He was shot through the cheek.  Years later when he attended a reunion at the site he met the former-Union soldier who shot him.  They shook hands and exchanged words that indicated they could hold no animosity as they were now part of the same country again.

That reminded me of this clipping I had come across online about one of our Mooneyham relatives who had fought in the Civil War. It was posted by Judy Lynn in 2012 on the Find A Grave memorial page for Daniel Mooneyham. I am grateful to her for making it public.  I do not at this time know what paper it came from or who wrote it.  The writer states that Daniel Mooneyham was still alive at the time of the article and was 93 years of age. If his year of birth of 1834 is correct that would place the article in 1927.  That, however, is after the year I have for his death, which is 1921.  The article also says he was middle-aged when he entered the war.  That would indicate that the 1834 date is wrong.  Perhaps more research will set this matter to rights, but I would guess that the article was around 1915 – 1920.

Daniel was from a branch of the Mooneyhams who had moved on to Tennessee.  They are more distant relatives and I have not looked into their lines much. The grave marker shown below provided me his regiment, Tennessee Cavalry, 13th Regiment, and the National Park Service Soldiers and Sailors Database showed that he was a Private.

There is likely more information about Daniel Mooneyham that could be added to give a better picture of his life, but for the purposes of this posting I’m going to let it stand at the very human story revealed in the newspaper clipping below.  I think such scenes must have played out in many places in many states. 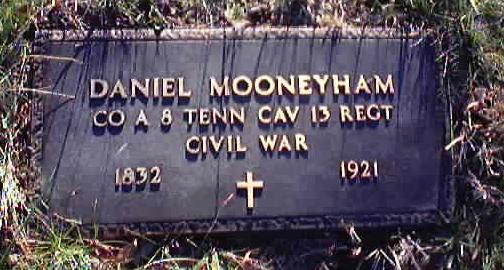