I consider this one of the great finds of my research. We understood that we had MacDonald blood, but it was less clear where and when it entered the family tree. Sìleas was a poet of the late 17th and early 18th centuries. It’s a wonderful thing to know the houses ancestors lived in, to have inherited some item from them, or to walk the ground they walked, but in Sìleas’ poetry we have the feelings of one our ancestors, we have her thoughts, and a glimpse of the life she lived from her own hand. In her poetry, we can hear Sìleas speak across the centuries to us.

Sìleas was the daughter of Gilliesbuig, Chief of the MacDonells of Keppoch. She grew up in the Lochaber are of Scotland, married Alexander Gordon of Camdell of Beldorney by 1685, and moved to the northeast of Scotland.

Twenty-three of her poems are still extant, though not the tunes to which she would have sung them. Her poems fall into three main categories: political commentary (she was an ardent Jacobite), religious (she was a devout Catholic – some say after a “frolicsome” youth she had an encounter with death and became more devout, capturing that in her poem, Conversations with Death), and laments or elegies for family and others close to her.

Gaelic verse in the 17th century was primarily in the form of song. The work of the poets of the period were composed and transmitted orally until, in the aftermath of 1746, collectors, fearing that Gaelic society was coming to an end, began writing down a large body of traditional literature, with most of it dated after 1770. Up to 1750, the primary way songs and poems were transmitted was through the institution of the ceilidh-house. This was a gathering place that once existing in every Highland village where musicians, poets, and common folk gathered to share and learn and preserve for us the stories, songs, tunes, poems, and dances of the Gaelic world. Thomas McKean offers a good example of the ceilidh-house in his1996 book, Hebridean Shoemaker: Iain MacNeacail of the Isle of Sky.

Sìleas lived in a tumultuous time. For much of the 18th century Scotland was a country divided in terms of politics and religion but also of language. The Keppochs were under constant pressure from the central government, which only increased after the Act of Union of 1707. Her brother, Colla, chief of the MacDonells of Keppoch after the death of their father in 1682, spent much of his life holding Keppoch lands by the sword. Sìleas’ marriage in 1685 offered her some security, particularly after she and her husband took possession of Beldorney castle in 1700, but in her security she wrote even more strong political views while her brother fought military battles, the practice of which continued throughout her life.

“Sìleas na Ceapaich’s [Oran do Righ Seamus] ‘Song to King James’ was printed first by Patrick Turner in his Comhchruinneacha do Dh’ Orain taghta, Ghaidhealach (1813, pp. 106-8), but its composition may be assumed, from its tone and content, to have occurred between October 1714 and the summer of the following year, shortly before the first mustering of pro-Jacobite forces at Braemar.”

The song presents as a lullaby, leading to speculation that it was addressed to one of Sìleas’ daughters, offering hope for her daughters’ future. Yet the imagery includes much about hard times, images we would not today equate with a lullaby. Particular aspects of its construction have been pointed to as having propagandist purpose.   In his 1972 edition of Sìleas’ poetry, Colm Ó Baoill identifies the most striking lines which suggest the unpopularity of the new King George and his perceived ineptitude for leadership: ‘The old saying’s so certain/ That I’d guess that it is true: / That a pig in the saddle’s no rider’ (v. 4). Ó Baoill’s commentary on this line notes that the phrase appears to be comparable to the proverb ‘A pig in the parlour is still a pig.’

Ó’ Baoill compares her poetry favourably with the great poet Iain Lom, a contemporary of Sìleas’ and also a Keppoch MacDonell. “Her lines: ‘Hard it is for me that they brought ruin to you […] When they prepared your meal […] When they served a poisoned onion/ Sliced upon each plate’ (v. 6) plays upon the meaning of uinnein/ Uinein (‘onion’/ ‘Union’) – an alternative to the more common Aonadh – and also conveys neatly the extent of the meal’s effect (gach can be ‘every’ as well as ‘each’, suggesting the widespread resentment of the Scottish government’s transfer of power to Westminster).” A unique aspect of these lines is that they address Scotland. Ó’ Baoill points out that such personification of Scotland is rare in Gaelic poetry.

One form of Gaelic writing is called Oran nam Fineachan (Gaidhealach), ‘The Song of the (Highland/Gaelic) Clans. These poems consist mostly of a list of clans or chiefs who should come out and fight for the Jacobite cause, and an exhortation to do so. The poems were meant to bolster the reputations of these clans and chiefs and make it harder for them to not join a rising. One of the two known poems of this kind referring to the 1715 rising was penned by Sìleas, which established her as the chief poet of the1715 rising. In the Edinburgh History of Scottish Literature: From Columba to the Union of 1707, Ó’ Baoill refers to Sìleas as a “worthy practitioner of blackmail” in praising her poem, pointing to these two verses

(Convey a greeting after the heros, to the band whose badge is the heath, to the leader of the Brae and the rest of my kin: may you have victory in hunt and battle forever.

Fresh troops are coming to us: Mac Coinnich (the McKenzie chief), Fraser, and MacLeod, Mackinnon of Strath Chuailte and the affable Chisholm; I am confident that they will strike rending blows.)

She is perhaps best known for her elegant lament for the Glengarry clan chief Alasdair Dubh. The first verses are devoted to her husband and daughter, both of whom Sìleas had lost by the time she wrote ‘Alasdair a’ Gleanna Garadh’, as the poem leads to honor Glengarry. It is possible that the lament with its evident depth of feeling was meant to be a reflection of multiple sources of grief.  Below is a verse from this poem. 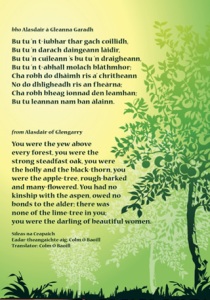 To hear Kerrie Finlay perform a version of this lovely lament, Click Here.

Lachlan Mackinnon (Lachunn mac Thearlaich Oig), the poet and harper, who died about 1734, was a favourite in her father’s family and later in her own. She eulogized the harper she had known for much of her life in a beautiful poem.

Sileas’ religious poetry is represented by Laoidh Mhoire Mhaigdeann, a hymn to Mary still sung among Highland Catholics. Below Maggie MacInnes offers a rendition of the hymn.

‘Sìleas na Ceapaich’, in The Edinburgh History of Scottish Literature I: From Columba to the Union (until 1707); Colm Ó Baoill; eds. Clancy, T.O. & Murray Pittock; Edinburgh; 2007